“The Talbott Tavern is a uniquely well-crafted early American stone building and an extremely rare example of Flemish bond stonework. We are in deed fortunate to have this historic inn illustrating the excellent craftsmanship of the settlement period.”

The Old Talbott was built in 1779 and has been called the oldest western stagecoach stop in America. It was a haven of hospitality to those sturdy pioneers who carved an empire out of the threatening wilderness. From its simple, rough beginnings the tavern mellowed with the years, typifying the gracious living than burgeoned in the Old South.

The thick Flemish bond stone walls, the deep window casings, heavy ceiling timbers and built-in-cupboards strongly remind one of the Warwickshire Inns in England. The cooking was done in two fireplaces in the rear of the original section. Traces remain of the staircase to the loft where men were housed in one room of two rooms, and women in the other. The practice of giving individual rooms to guests was not introduced into the United States until about 1805.

The Tavern is located at the crossroads of the young west, where the Post roads, North, East, South, and West met, caused every stagecoach to stop at its door. Here the grateful passenger found cheer and warmth, while horses were changed for the long trip ahead.

Through the welcoming portals of the Old Tavern, there passed a long procession of statesmen, solders, adventures, artist, and rulers. Andrew Jackson knew of the warmth of the hearth fire in the central room. There, Henry Harrison found cheer in its friendly atmosphere. General George Rodgers Clark used the tavern as a base; provisions and munitions were brought overland from Virginia and stored in the cellars of the tavern.

Legends say that during King Louis Phillippe’s exile, he, his two brothers, and other members, desiring to see the New World, arrived at Tavern on October 17, 1797. During their stay, one or more of the entourage is belied to have painted the murals which were uncovered in 1927. A dozen or more holes are found in the plaster in the room. Legend tells us that the bullet holes were left behind by Jesse James. Related to Donnie Pence, sheriff of the Nelson County, It’s reported that he had too many drinks in the Pub one evening then went upstairs to sleep it off. He “saw” birds moving in the murals and shot at them, leaving behind the bullet holes we see today.

Stephen Collins Foster, during his visit to judge John rowan at “ Federal Hill “ now my Old Kentucky Home, knew the charms of the inn. Abraham Lincoln, at the age 5, stayed at the Tavern with his parents while they were involved in a land dispute. The Lincolns lost the case and as a result moved to Indiana. John Fitch, inventor of the steamboat, spent many hours in this old tavern.

During the latter part of the 18th century, this tavern was the Western end of the stagecoach road from Pennsylvania and Virginia.

The western Herald, published in Bardstown on September 23, 1829, carried the following advertisement: “Chas. Holloway, having returned to the old stand formerly occupied by R. Head, west of the Court house, has one of the largest, best constructed, and the most convenient hotels in the place. The stable corresponds in size and convenience of patronage and to customers in the general to pledge himself to devote his whole attention to render their situation comfortable and agreeable.”

The eastern end of the building was first erected with its two-footed walls of solid stone. Later a western wing of brick, and the connecting wing with verandas, was added. This brick section was added sometime in the early 1800’s. It is in this portion of the building that Alexander Walters was born. Walters, one of the co-founders or the NAACP, was borne in the kitchen area to his mother, who was a slave. It has been said that she went right back to work after giving birth. The final addition of the building, was done in the 1960’s, is the most western part of the property. It originally housed a drug store.

In the course of the history, this ancient hotel has borne many different names. It was called the Hynes, Bardstown Hotel, Chapman’s House, Shady Bower Hotel, the Newman House, Old stone Tavern, and today is recognized as the Talbott Tavern.

The Tavern suffered an electrical fire on March 7, 1998. The upstairs sustained the heaviest damage and the downstairs received mostly smoke and water damage. It reopened in November 1999. The Mural Room is now open for the public.

The Tavern today stands as one of the oldest buildings in Bardstown. Where automobiles go today, stagecoach drivers once cracked their whips.

When visitors walk into the Old Talbott Tavern, there’s a feeling about the place. It’s well kept, but the passage of time is evident in a few creaking floorboards. There’s an air about the place that speaks of people who have come and gone, spending time in the pub and retiring to their rooms before an early morning departure.

The old stone reminder of Bardstown’s beginnings still welcomes visitors to the bustling downtown area. Since the late 1700s, the Old Talbott Tavern, on Court Square, has provided shelter, food and drink to Kentucky travelers.

The Old Talbott Tavern is said to be the oldest western stagecoach stop in America as the westward expansion brought explorers from the east into Kentucky.

One of the most famous visitors of the Old Talbott Tavern was Daniel Boone. In April of 1792, he was subpoenaed to give his deposition at the stone Tavern on the court square. At this time, the courthouse was not used because it was under construction.

William Heavenhill, an early owner of the property on which Heaven Hill Distillery is located, was a frequent patron of the Tavern. “Mr. Ed” Shapero, who organized and started up Heaven Hill after prohibition, often had lunch at the Tavern. The father of the present owners of the Tavern was Mr Ed’s paperboy just before WWII. 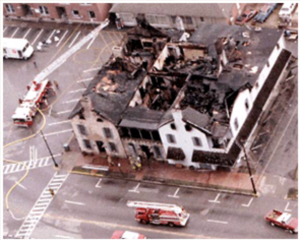 On March 7, 1998, a new chapter was written in the Old Talbott Tavern’s history. The Tavern suffered from a devastating fire. An early morning blaze destroyed the roof and most of the second floor. The main floor suffered from smoke and water damage. The well-known murals suffered from heavy damage and have not yet been restored. The Tavern underwent a long period of rebuilding and finally reopened its doors in November 1999.